As Old as Man Can Remember

A Silhouette is… .. the Recognizable Shape of Fashion as it changes. The Silhouettes logo is a representation of the “corseted waist” through time (the hourglass shape and the hourglass of time).  It is the Silhouette, the desired shape of fashion, that prompted the use of devices such as corsets and stays by women, children, AND men throughout history including today. 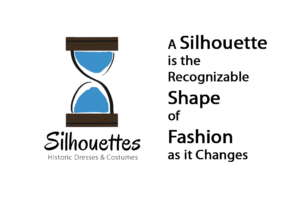 The earliest records of “corseting”, meaning reducing the dimensions of the torso are found on Minoan pottery dating to 2500 B.C.  Historians believe the Minoan men and women wore stiff leather belts and even straps of wood around their waists to enhance their appearance of “rigorous athleticism”, or athletic prowess.  That silhouette was desired as an ideal representing their ability to defend themselves.

Development of the concept of “Fashion”

The Middle Ages lasted from the 5th to 15th century.  They started with the fall of the Western Roman Empire,  and continued until around the time Christopher Columbus arrived in the New World in 1492 when the era merged into the Renaissance which would mark the “Age of Discovery” and the beginning of the Early modern Europe.

In the history of Europe, the Middle Ages were also called the Medieval Period. The soft flowing lines of the Medieval period followed the natural figure, and no artificial shape was given to the body.

By the early Middle Ages in about the 6th and 7th centuries , the purpose of clothing had changed significantly.  At a time focused on building new social orders, individuals of rank or status relied more on the layering of fabric, rather than the shape or lines of garments.  The “T” shape of the Roman tunic became more elaborate as time went on.  The tunic was a rather shapeless garment of fabric wrapped around the body and tied in various ways to keep it from falling off.  Social order was illustrated by the number and type of tunic; the more tunics, the higher status.  Most Romans wore just one fitted tunic underneath, and one on top.

By the middle part of the Middle Ages, modes of etiquette were being established.  Along with rules for behavior and interaction, came a loose definition of “fashion”.  Shapes and contours of fabrics and then garments took on new meaning.  Selection and wearing of certain “designs” were used to promote the  ambitions of the individual.  Fabric had become a commodity itself, used in trade between newly defined borders and countries.  “Fashion” began to define class, status, and position in society.

The late Middle Ages, dubbed the “Perpindicular Gothic” because of lofty, spired cathedrals, was a time of great castles and churches throughout Europe.  There came a defined “Court”, where persons of power and political persuasion along with their extended personnel would create courtiers and ladies.

The newly established rules of manners and style of “Court” drew attention to what a person wore and how they wore it.  Details in fashion became important as defining status and position.  The Tailor’s Guild was created, developing skillful garment making and new techniques for the manufacturing of clothing.  These new methods demanded new types of textiles and methods of making and obtaining them.  New equipment had to be developed to support the innovations of the guilds who were working in response to a new demand for what had become “fashionable”.

In particular, woolen textiles were milled and processed in such a way that a garment could be easily cut and molded.  Special structural linens “buckrams” were created to provide foundations that could support the exterior garments.   With strong support, more subtle detail could be obtained in the outer garments.

By the end of the Middle Ages, technology had developed metal hooks and eyes and metal points to finish off the ends of braids and cords.  These were now being used to lace garments onto the body, rather than just wrapping fabric around or putting it over the head.

In about the middle of the 14th century, when clothes began to shape the figure, it is believed older women who had lost their shape, or other women who did not have much shape, would have worn an “under robe” of a stiffer material and laced it more tightly.  By the 15th century, the waist became high, and a small wide band of stiff material was widely worn to make a “middle small”, although it is unlikely any stiffening was added.

This early waist garment was called a “cotte”, an old French word for any close-fitting garment.  (Today the French word cote means “next to” or “rib”).  Various garment names were evolved from this: petticoat, waistcoat, etc.  When the word “corset” was used, it meant an outer garment, and was not at all associated with the later application of the term for undergarments.

Where the Middle Ages were religious, the Renaissance was considered a secular (non-religious) era.  Rather than a focus on class and groups, it was a movement praising individualism over the Church in measuring things.

In Europe, the influence went from Italy to Central Europe, and then to Britain.  Each region refined and changed the concept of the individual as pursuing personal success, or as pawns to greater powers.

By the middle of the 15th century long, spiring, Medieval lines of fashion had stretched to their limits with peaked shoes, tall hats, and vertical lines.  As the 16th century (year 1500) approached, the silhouette broadened and widened.  The Renaissance “style” spread from the south in Spain and Italy towards northern European countries.

For the first time in history, patterns were woven into fabric.  Through Venice, Italy, Europe imported Oriental silks and velvets, with intricate designs and weaves.  This made Italy a central “power” of “fashion” at the time.

As Court became more powerful in European countries, the fashionable silhouette became straight and tight on both men and women.  This culturally represented a masculine position.

The Corset Arrives as “The Body”

While the iron and steel corset of the Renaissance is believed by some to have begun as an orthapaedic device, examples are more indicative that it was first worn as a female representation of armor, to raise the power and status of women at the time.

Because it was worn only by women of the ruling classes, it is believed these were women of political power who actually needed protection such as armor against people who wished them harm.  They were worn with petticoats over them, in thick layers.  Layers of jewelry and stiffened lace collars and sleeves were padded to make the woman look imposing.

It was the padded under armor for men that influenced tailors though to develop an outerwear which might be called a “corset” for both men and women.  A diagonal basting stitch called the “padding stitch” began the art of corset making.

The “Jack”, a stout leather jerkin with attached metal studded sleeves and thigh sections, is believed to have initiated the idea for similar female stuffed, padded, and metal bodices for women.  A “body” was developed from layers of linen, or for women of highest status, metal cages.  Some were padded and stitched garments with whalebone stiffeners.  Whalebone had been available since the 15th century.

At this time, the technological innovation was the separation of the bodice and skirt, rather than one whole draped garment laced on to the body.  With this, tailors were able to focus separately on top or bottom.

The bodice could now be stiffened to support the weight of the skirt.  The skirt could therefore be made much larger and heavier.  This larger overall silhouette made the individual look bigger and more important.

Whereas power was relayed in the volume and body of the garment, now it could be done with glamorous decoration.  Women were imitating men, who had been wearing since Medieval times structured garments called “cotte, gambeson, doublet, pourpoint” and other terms.

In the 16th century, this garment began to be called a “waistcoat” which was made of two or more layers of heavy linen padded together and quilted.   It was worn with a short basque that had eyelet holes into which hose were laced.

The true “waistcoat”, however was a man’s garment, although they looked much the same, the difference was the skirt versus the men’s lower garments.

It was the fashion to wear the outer robe open, so the front part of the waistcoat began to be elaborately embroidered and embellished.  It was used to cover and hide the fastenings, and became the “stomacher” or “placard”.

When a woman began to wear this arrangement, it was called a “pair of bodys” or sometimes just a “body”, although that term usually meant just the upper part of a robe.  The French used the same word for body, “corps” for both upper and under bodices.

This early form of “corset” was probably quite simple in shape and made from only two pieces of linen sometimes stiffened by paste.  They were stitched together and shaped to the waist at the sides.

To keep the front part very rigid, a “busc” was added.  This was a piece of wood, horn, whalebone, metal, or ivory that was thicker on top and tapered down.  This was often beautifully decorated and inserted between the layers of linen and tied in by a lace.

In the 2nd half of the 16th century, the pair of bodys was reinforced further by adding whalebones (baleen, or cartilege from a whale’s mouth) to the front and the back.  The side lacing of the eariler period was changed to the more convenient center back or front opening.

When it became fashionable to open the gown in front, the “stomacher” was used to hide the front lacing.

The Tudor period occurred between 1485 and 1603 in England and Wales and includes the Elizabethan period during the reign of Elizabeth I until 1603. The Tudor period coincides with the dynasty of the House of Tudor in England whose first monarch was Henry VII (b.1457, r.1485–1509)

These periods saw fashion as an elaboration of the Renaissance styles.  Court life was extremely influential, as political supremacy dictated behavior and culture.  War and political marriages brought new ideas to cross over the boundaries of countries.  Tailors continued to be the innovators and implementers of new ideas.

Trade with india brought a new kind of starch called “rice starch” which had been used by Indians as a protective barrier between hair oils and costly fabrics of garments.  This collar stiffener affected how European fashion would be developed with the elaborate collars and ruffs of Courts such as Elizabeth I’s of England.

This was a time in Europe when the Catholic Church held control over social morals.  It was a time of Restoration of the British Monarchy, who introduced a more sober attitude.  Clothing became more elegant in style and simpler in cut.  Women’s fashion was a version of man’s doublets, including short waisted “basques”.  Silk satins were the favorite of the day in only plain weaves.  It was also a time of symmetry, and the beginnings of a woman’s riding habit.

In the 17th century (1600’s) and for the next 100 years, the “pair of bodys” would be called instead a “pair of stays”.  The latter name is still used today to describe the under bodice with artificial stiffeners as supports or “stays”.

In England the word “corset” can be found from the 17th century forward, but it is always used in plural “corsets”.  France kept the old term “corps” until about the year 1800, after which the term “corset” (never “corsets”) was used.

Fashions at the beginning of the 17th century were very similar in shape to those of the 16th, but the neckline became much lower in front.  By about 1620, the farthingale (skirt support) was discarded, and gowns became much shorter.

The stays followed the fashion of the waistline as it rose or fell, but stays kept a long center front and stomacher.  The basque was replaced by long side tabs, to which petticoats were tied.