The 1890’s were known as the “Naughty Nineties” because science and technology were moving at a fast pace, and everything was bigger – from giant hats and hair to sleeves and steamships.

By 1889 England and European countries would be at war again, this time in Africa.  Conflict and turnover of power would start the American-Spanish War, and the Philippines would become independent of Spain.  China would begin the 88 year lease of Hong Kong territories to the United Kingdom.

College sports were invented for men and women including cheerleading for American football.  Sports and sports literature were wildly popular with poems such as “Casey at the Bat”.

The eiffel tower was completed in Paris, and the Columbia Exposition in the United States showed new innovations to the world.  Communication and trade continued to expand worldwide, and literature and art expanded into new realms of thought such as “The Time Machine” and the Impressionist art movement.

The first modern Olympics were held in Athens, and inventions just kept coming including the Ferris wheel, Kodak camera, and Bayer aspirin.

This was a transitional time between the Victorian era of restraint, and the loose and fanciful life of the Edwardians.  The Victorian Era had spanned 64 years, and changes in attitude were constantly shifting during that time.  Roles of women and women’s independence had somewhat paralleled the life of Queen Victoria who was crowned at age 18 and grew up during her reign.  Women “grew up” with her in a way.

The Edwardian era, named for Edward VII King of England who loved extravagent pleasures with balls, house parties, travel, athletics, and mobility redefined roles and purposes of women.  In a fast-paced world of technological change, Edwardians tried to recapture a romantic and nostalgic past and focused on leisure pursuits which all persons of all levels and classes worldwide attempted to emulate in some form

Social and political structure was built, particularly in the United States, on a rising middle class due to industrialization.  The middle class “aped” the upper class of Europe.  Middle and upper classes had outfits specific to every occasion and activity. 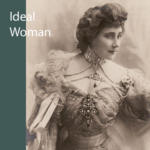 Tennyson wrote at this time of this romantic ideal relationship between men and women as “women staying by the hearth with their needles whilst men wielded their swords”.

The head of the household dressed his woman to show off wealth, and a wealthy woman’s day was governed by rules of etiquette.  Fashion plates gave clues how to dress for status.

For the poor however, things were different, particularly in Europe.  For them, 5th hand clothes were typical, as the average poor mill worker could only afford the food left over from a rich household.  With a stronger middle class in America, the situation was a bit better.

The most acceptable career for all women was still marriage, although single women were no longer considered an oddity, and many women ran businesses or worked in (gender defined) jobs.  Women were expected to put their men first, and to remain within marriage as if they were weak and helpless.  The Edwardian woman’s prime use was to bear a large family and maintain a smooth family atmosphere so her husbands could focus on making money.

Women were expected to remain faithful, although men kept mistresses openly.  It was a hypocritical period where many relationships were artificial until 1887 when the Married Woman’s Property Act gave women the right to own property.  Before it, anything a woman owned became her husband’s at their marriage; including herself. 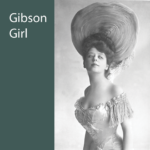 YET ANOTHER IDEAL WOMAN EMERGES 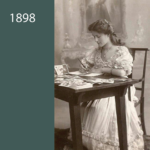 Ida B. Wells grew up in the south, and moved to New York and then to Chicago to further her causes and to earn a living.  One can assume the culture and her upbringing affected whom she would become and what she would do.

After the Civil War, and during the Reconstruction, the Southern economy was improving, but was hit by set-backs including the boll weevil infestation of the late 1800’s to 1920’s.  This devastated cotton crops and led to The Great Migration; a time period when one and a half million black Americans moved out of the rural south to find employment and equality in urban industrial cities all over the country.  This movement was also escape from lynchings, unemployment, and oppression.

Black women’s roles in the South were difficult and required constant dedication and hard work.  Since most of the south was agricultural, the economy was agriculturally based.  Women’s main responsibilities centered around the household.  They raised the children, cooked the food, and also worked in the fields as needed.  In urban areas, women worked outside the home as well as did all the household work.

Despite their increasing number roles, opportunities for education, and abilities compared to their mothers and grandmothers, women still played a subservient role to men.  They had no legal voice, and any abuse they faced would not be entertained by the courts.  The only way to deal with abusive issues was to survive through submission or fighting back.

Not all women had hardship though; in fact black women were very active and effective in their pursuit towards citizenship in the 1800’s.  When the 13th (1864), 14th (1868) and 15th (1870) Amendments were ratified, all American citizens were considered equal, yet, black women found the government did not recognize their citizenship nor their right to vote.

Southern women in particular began to rally and gather to pressure the government to recognize women’s rights.  In the early 1890’s, American women of all backgrounds and across the country were increasingly active in the suffragist movement.  Many women felt that until they got the right to vote, men would maintain superiority over them.

Many suffragist organizations were formed around the turn of the century, like the International Women Suffrage Alliance of 1904 which catered to middle class women, the Equality League of Self Supporting women of 1906 for working class women, and the Southern States Woman Suffrage Conference of 1913 to enfranchise white women only.

Although historically active in the passing of laws on behalf of African Americans to gain American citizenship as well as the right to vote, black women found their application of such rights ignored by white men and women as well as black men.  It was not until 1920 that all women nationwide gained the right to vote.

Religion played a large role in the life of black Americans in the South at the time, and it was often the center of social lives, offering not only a place to gather free from overriding authority, but a place to speak freely about their concerns.  The gospels of the Bible were a strong connection in that the lives of biblical persons paralleled greatly with the lives of the southerners.  They could relate on a personal level to the trials and tribulations.

Music was an integral part of African American lives and religion at the time.  Blues music emerged from work songs, folklore, and spirituals that identified with difficulties of the southern black life experience.  This music did not conform to rules of the day, and so was unique and special to the southern culture.

While people at the time owned their own homes and ran their own households, they did not feel free as they still feared what would happen outside of their house.  Hate crimes such as burning homes and businesses, and lynchings were prevalent throughout the country, and numbered greatly in the south.

Although rights had been granted, neither males nor females really had them because they were not recognized or applied by the government or the general population.  Alliances, both open and subversive, led to conflict, riots, and resulted in yet more hate crimes.

It was into this impassioned, volatile, and transitional time in history that women like Ida B Wells stood up to fight for the rights of women and African Americans.

Click here to go to Dr. Anderson’s Main page with the Finished project