Hanna’s “Penny Dreadful” was a fictional character, so we had the luxury of making it as historical as we want.  Even though the project was to be theatrical, it was necessary to be as close to historically accurate as possible in order to bring about the intent of the author in showing the contrast between this high fashion character of the time with what “others” would have been like in the Wild West. 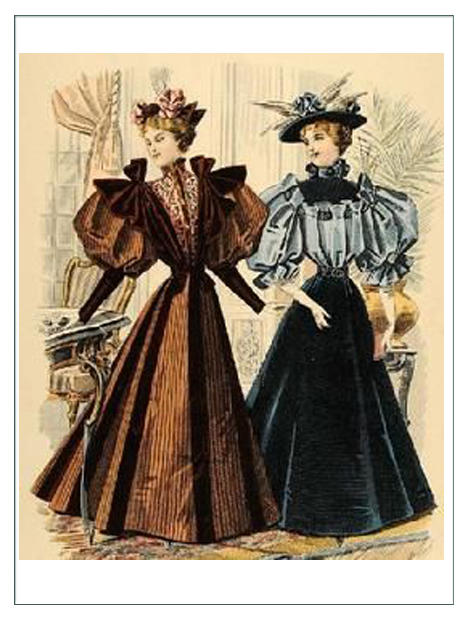 Hanna made the executive decision (consistent with what her character would have done) to not wear a corset or petticoat.  We agreed under the condition the main garments would be structured with bone & wire, to give the authentic appearance.  Wiring & boning of collars, bodices body, tails, & waists was historically accurate anyway.

Based on color fashion plates & extant garments of the era, we would build a gored skirt that would keep its shape & move correctly in the sweeping fashion of 1895 (before the skirt would add more gores and increase the back length into a train).  This would be more consistent with a traveling or sporting ensemble.

She would have liked the train, but this character would have traveled west on a locomotive (train), so she would have kept her skirt above the ground.

To be high fashion of one coming from New York City, the sleeves would have to be the largest ever in fashion history; that shape could not be sacrificed, so we developed internal structures & padding – exactly as they did at the time – for the sleeves.

If one notes historical references for the construction of sleeves, there are many which were made of the full fabric, cut in such a way that the single piece of fabric goes wide & then narrows to the wrist.  The higher fashion and larger sleeves of necessity in construction were of separate pieces; thus extant models show contrasting fabrics for lower and upper sleeve sections.  We believe this gathering of a sleeve that could be up to 20 yards of 22″ fabric into an approximate 9″ circle, was probably (other than corset-making) the most difficult construction in fashion history.

Garments of this time for entertaining or evening were made in contrasting colors & fabrics; e.g. silk with velvet.  Hanna, depicting a traveling reporter who was a working woman, needed a “suit”.  “Suits” of the time did not yet include a “blouse” which would be “invented” in the next 10 years.  They instead had evolved out of activewear in response to practical needs for horse and bicycle riding.

Suits would become the 3-piece ensemble similar to that which men were wearing later.  At this time they were typically of a middle range color such as tan, light green, gray, or blue which would wear well & not show dirt so well from traveling on a sooty train or out walking a dusty path.  They were of solid color, in 2 pieces, with the gored skirt & fitted tailored bodice typical of the era.

The appearance of having a 3rd piece was created by the older version “chemisette”; a bib-like front piece made of lovely tucked or bloused fabric and/or lace, or “revers”, a sewn insert into the jacket/bodice that had the same appearance.

Revers were often worn with ties, ribbons, & lace for those of high society.  Hanna selected to use a revers for practicality in theatrical performance (easier to just put the one bodice on), and because it could be elaborately decorated as per her character.

As personal preference, Hanna’s “Penny” opted out of wearing a tie, in favor of a pearled neckline.  The “pearls” would continue on the front of the revers & on the sleeves; again a personal preference in favor of high style for this character (historically, the traveling suit would have a removable cuff because it could be taken out and cleaned in a hotel room).

Having the basic garment selected, the rest was a matter of choosing accessories.  While a woman out walking, yachting, or cycling at the time might wear a plain, straw “boater” hat, the high fashion woman would have something much grander.

Hats of the time began as wide-brimmed with a moderate crown, and a few feathers, ribbons, or silk flowers.  With each passing year as the Edwardian era progressed, they became huge, extremely broad-brimmed, and had thicker brims to hold up the huge amount of birds, feathers, & bows.  The Edwardian Grand Dame would carry so much weight on her head that it (along with the “S” corset which altered her center of balance) would tip her forward so that she had to walk with tiny, mincing steps.

Other accessories, parasols, canes, boas, & boots came into extreme popularity in this era.  Because the Penny character needed to carry a notepad, and because this was a one week stage performance, Hanna opted out of investing in extensive accessories, & requested just a hat.  She was able to find a simple pair of pumps with a similar heel to the era, although the character who traveled for a living, would have most likely worn fashionable, button-up boots.

Following are more extant garment and photographic examples used for inspiration in the design & construction of Hanna’s costume.

Click here to go to Kateri’s Design Development page (next)