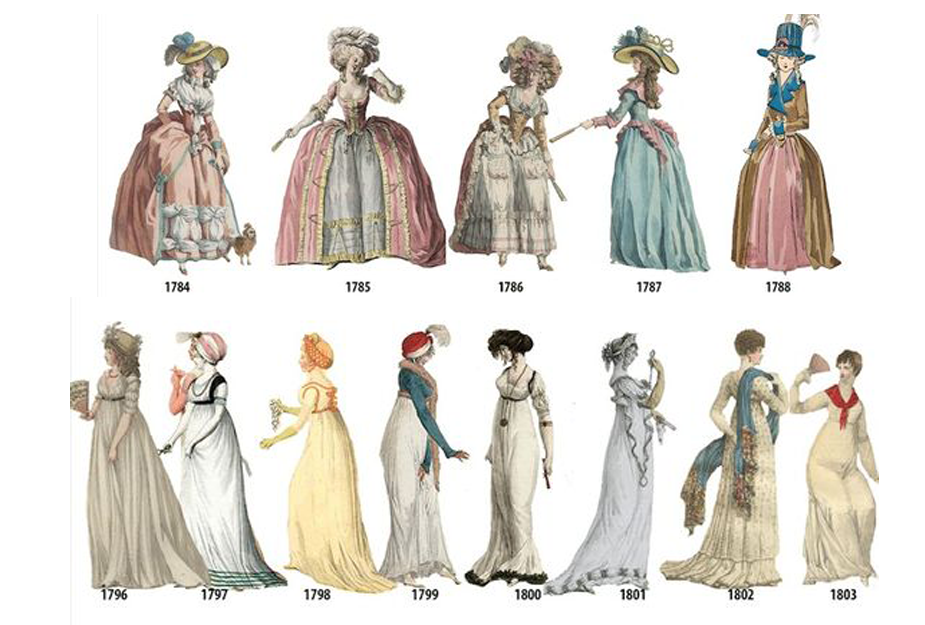 Women’s fashions at the turn of the 19th century display the results of the Napoleonic Wars, inc which fashion absorbed influences from the Middle East.  Exotic fabrics, turbans, transparent cotton muslins, feathers. exotic jewelry, and a taste for Classical Greece followed.

This era was known as “neo-classical revival”, and it had an overwhelming effect on fashion.  Women wanted the light and diaphanous fashions like Greek statues.  This was the period written about by authors such as Jane Austen.

In France, there were traveling weavers who introduced lovely striped fabrics that were actually an innovative way to use up leftover yarns from other weaves.  The French peasantry, wearing these, so charmed Queen Marie Antoinette that she introduced new fashions using them.

By the end of the 18th century, France was at war, and an abrupt change came to all structured and elaborate garments.  It was at this time the scientific study of the human body had come to the garment making industry.

It was discovered the body was in proportion to head measurements.  W.H. Wampum, a German tailor was fascinated with this law of Anthropometrics, and began to work with the idea of drafting patterns to size rather than draping on the body.

As society was rapidly growing more urbanized, the demand for mass production demanded “proportionate” systems to speed up the trial and error of previous methods.  The fitted garment became the norm.

In spite of restrictions placed on the import and usage of printed cottons coming from India in England and France at the time because those countries wanted to support their own textile industries, cotton became wildly popular.  Cotton quickly replaced silk, wool, and linen.  By 1759 France and 1774 England had given up and removed the laws.

In France, the leader at the time of world fashion, social order had been completely overturned during the French Revolution.  With it came a loosening of morals and deportment.  In France, the new, clingy, near-naked fashion silhouette was more popular than other places such as England.

Writings of the English and French, however discuss that stays were worn or not worn in equal measure.  Young women and those with beautiful figures discarded undergarments, while those of “bountiful flesh” or older and gravity drawn shapes continued to wear some sort of understructure.

At the beginning of the 19th century (1800) the Grecian figure, or the natural body with high rounded breasts and long well-rounded legs and arms was the ideal every woman strived to obtain.  Neo-classical fashions demanded a more revealed and youthful bosom in its natural state.

The new soft, light cotton muslin dress clung to the body, showing every nuance and every contour of her shape.  This meant some form of support would have to lift the breasts.  It also meant small women or older or less endowed women might need some type of padding or augmentation.

Heavy, thick, or extra undergarments were discarded though, as they distracted and ruined the “natural” body shape, and so the boned stay lost popularity with the woman trying to obtain the “fashionable” shape of the day.

The light early Regency or Neo-Classical corset has gussets to enhance the bust and hips with light bones or cording to facilitate lacing.  These had a central, usually hard wood tapered busk, up the center front to assist in pushing the bust line up into a prominent position.

This was the first time in history the “corset” was a pieced and complex garment.  Gussets, which assisted making the breasts and hips “rounded” were the beginning of innovative cutting techniques.

Stays or No Stays

At first dresses made of cotton were of the same fashion lines as stiff silks, but gradually with increasing use, the looser, simpler, and plainer style of dress began to evolve.  The simple cotton muslin dresses of the 1780’s had wide sashes.  By 1793, the sash narrowed and the waistline raised up.

With these soft fashions and the new silhouette, simpler and lighter types of stays were worn.  At first they were cut like previous ones but made of lighter and less stiff materials and bones, but as the body of the dress shortened, the stays began to shrink in size too.  The back became short, and the front long.   Tabs at the waistline were eventually discarded entirely.

Some early Regency corsets were fully boned, others half-boned, and some not boned at all.

At the end of the 18th century, the chaotic aftermath of the French Revolution and worship of antique fashion would simplify the dress still further.  All extra material was gotten rid of in both dress and stays, and by about 1808 for most women, stays were just a simple band or were not worn at all.

Many of the simple muslin dresses of around 1800 were mounted on a cotton lining with two side pieces that would cross over and fasten in front, providing a type of “binding” or support.  It acted as a type of early brassiere, and for many women, was the only thing worn.

For those who could or would not go without, and especially in England where social norms and mores persisted, whaleboned stays similar to the late 1780’s and 1790’s continued to be worn well into the first decades of the new century.

The new early 1800 stays became longer to go over the hips in order to smooth the line to obtain a semblance of the vertical silhouette of fashion.  The tabs were traded for hip gussets so they could be form fitting but still allow leg movement.

For the stout or heavily boned, these longer stays with lighter boning were reinforced with padding.  This type of early “corset”, worn only to control the shape, were not considered fashionable, but a necessity of those without perfect figures.  They were much ridiculed in English and French media.

As this was the first time in history fashion basically removed all understructure, there were experiments with materials and methods and techniques aimed to produce the perfect Grecian ideal  form.  There was a long, knitted corset of silk or cotton.

The old term “corps” had disappeared entirely, and in France this new undergarment was called a “corset” (“corps” now being considered vulgar).  In England the old term “stays” was still used, although the English started to call them “corsets”.  Until about 1809, both terms were used interchangeably.

In 1809-10 however, as the narrow and lower waist with wider skirts started to return, the name and use of a “corset” became more widely used.

A new type of corset began to take shape that was completely different than the preceding “stays” and the transitional Regency “corset”.

As the 2nd decade of the 19th century progressed, the emphasis changed from the 18th century rigid shaped body and the Regency flowing natural body to a silhouette with a small waist that had big curvy lines flowing out from it above and below.  The use of bust and hip gussets assisted the flowing shape of the curvy body being emphasized.

Late Regency – A Shape that would Stay.. without Stays

Late Regency – A Shape that would Stay.. without Stays

As the 1810’s progressed, the waist gradually lengthened in the dress design and dropped towards the normal waist position, the corset lengthened too and became more defined.  Extra side pieces were added for control and shaping.

At first, while the dress was still slender, this “bodice” was still far along on the hips, but it decreased in length as the skirt increased in fullness.  By the middle of the 19th century, the bodice or corset became very short.

The long vertical look of the period was in strong contrast to the 18th century.  The Regency silhouette became long and elegant with little reference to width.  As the early Regency turned to later Regency, the dress became stiffer and wider, and the silhouette required a change in understructure. 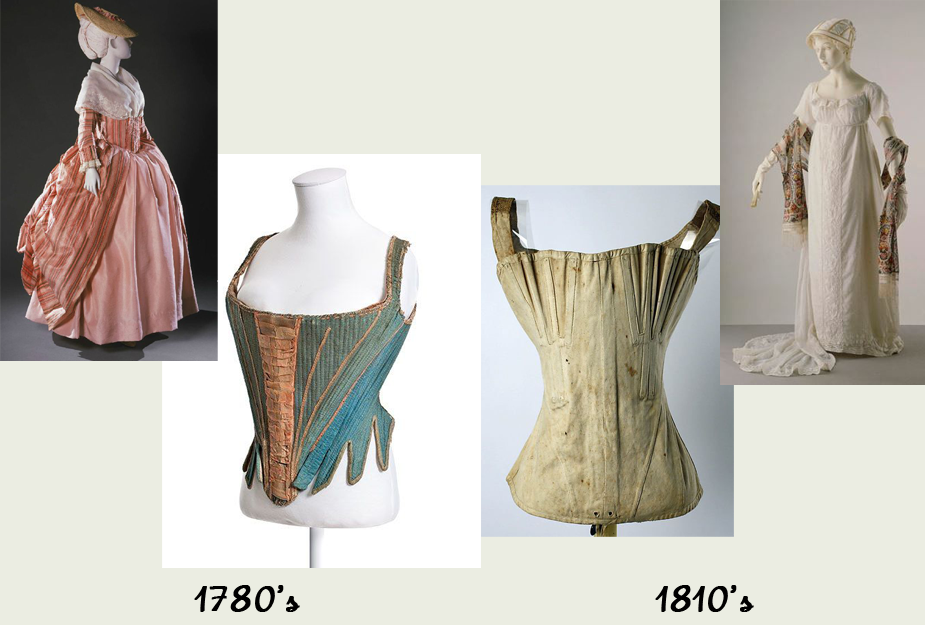 In about 1820, ladies began to fashion quilted bodies with a slight re-enforcement from whale baleen to assist in developing the new shape of an extended skirt, lowering of the waistline, and a gradual widening of the upper sleeve.

Military uniforms with their strong colors and rows of braid and epaulettes were copied into women’s fashion of the 1820’s, and began to influence the silhouette, which of course demanded a new shape to the undergarments. 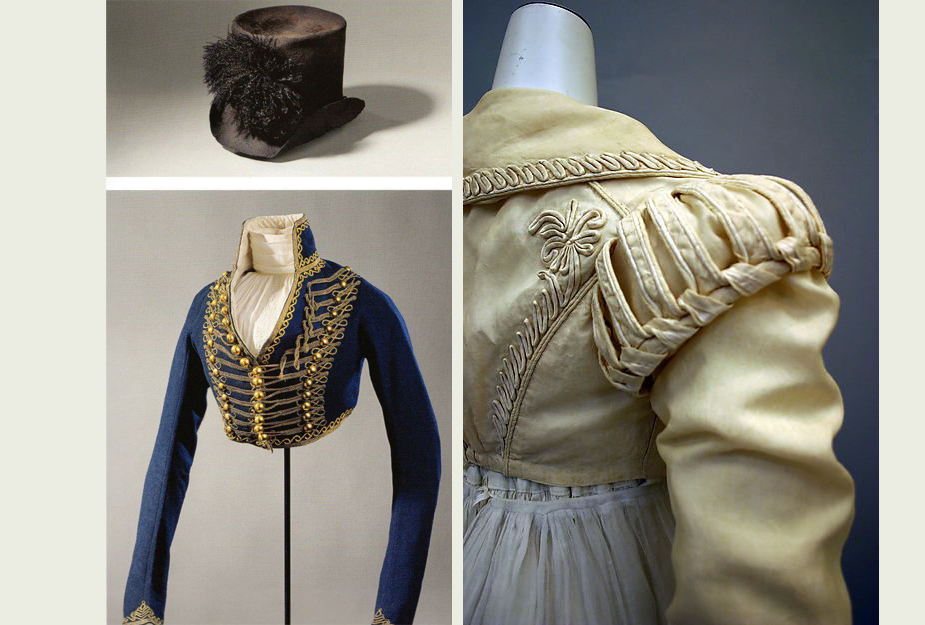 The new 1820 “bodys” helped visually reduce the waist size so the newer silhouette gave the wearer the appearanc e of having a tiny waist.  It was this shift in proportion that would lead to tight lacing for the rest of the century.

The corset through the 1820’s became fuller in overall shape at the top, and took on a molded, shaped basque area below the waist.

It was at the end of the 1820’s that riding corsets were developed especially for freedom of movement.

A wooden stick called a “busk” in late colonials and Regency corsets, was much like today’s paint stirrer but much thicker and more durable.  Typically made of a hardwood such as oak and maple, it was about 1/8″ thick and 1 1/2-2″ wide early in the Regency era, widening to 2 1/2″ later.  Early it was tapered, while later it was straight.

The purpose of the busk was to distinctly separate the breasts to put them into the cups provided by the corset so they were clearly “two pert apples on a tray” to quote a cartoonist at the time.

By about 1835, the flat wooden busk that was worn in the earlier Regency corsets to lift and separate the breasts became broad and was supplemented along the sides and in the center back to support lacing with whalebones.

For heavy women of the mid to late Regency era, side bones and extra back bones were added to support and shape a bit more than for slimmer women.  Older women liked these too, as they were more like the Colonial stays they grew up with.

From the late 1820’s until the 1840’s, most corsets (general called “bodices” during that time frame) had shoulder straps.

From the 1820’s until the late 1860’s, there were dressmakers who specialized in the making of corsets.  These were called “corsetiers”.  Most corsets, however, were made at home using patterns and instructions found in ladies’ magazines.